My husband and I have decided to completely gut and renovate a 1999 model 16x72 single wide mobile home for us to live in with our toddler. I purchased the home in 1999 and myself as well as several of my family members and friends over the last 16 ½ years have lived in it well.  Over those years we’ve never really done much maintenance to the home, as is evident by the weak spots in the subfloor and walls caused by a poorly maintained “gutter system” off the roof that accumulated leaves, rain, sticks and various debris.  There are leaks in the vents over the bathrooms, the floor doesn’t feel or look level whatsoever, and we are very suspicious of a major leak from the guest bathroom toilet (I kind-of don’t even want to know).  Beyond all of that, myself and various family members have smoked in the home off and on for years and that has definitely added another layer of disgust for this ex-smoker (I haven’t lived in the house for the last 3 years).

The house is a 3 bedroom 2 bath, 1,152 square feet.  The original countertops are a very cheap laminate in a blue marble look.  The original carpet is blue, and to add even more awesomeness, the manufacturer put carpet in the bathrooms.  The interior walls are obviously some type of cheap wall board with 2 different styles of wallpaper depending on which room you’re standing in that both consist of some sort of floral pattern (of green and blue of course).  There is a partial wall in the kitchen/dining area that separates the utility room and back door, and a partial wall that separates the dining area and living room that functions as a workstation on one side
and an entertainment center on the other.  The linoleum in the kitchen is beyond cleaning, and is showing a special kind of wear that actually invokes a few fond family memories (like the time my mother walked away from bacon cooking on the stove which caught on fire, and in the ruckus to put out, burned a small hole in the linoleum, but that story and others would probably be best saved for another post).
Our plan is to completely remove all appliances, cabinets, carpet, fixtures, and demolish everything down to the studs.  Then we’ll remove the 2 partial walls in the kitchen/dining/living room area to create more of an open concept. Once we have everthing open we’ll then be able to see what the interior walls consist of, and make decisions on whether we will add more insulation.  We’ll also be able to see more of the subfloor and determine how much of it will need to be replaced and figure out what size we’ll need to replace it with. We’ve also decided to move the master bedroom door from the front  part of the house to the back part (in thecurrent utility room), so that we’ll have more continuous kitchen space.  In doing that we’ll need to re-locate the electrical breaker box from the utility room side of the wall where it is currently to the bedroom side of the wall.  Eventually we’ll put in a new slider in the dining room area at the back of the house where there is currently a window which will open up to a back porch. We’ll also be adding a front porch to help with rainfall leaking in the front door which ruined the subfloor in that area before. We’ll also be doing some work on the well and trying to eliminate some rusty water issues we’ve been dealing with for way too long. 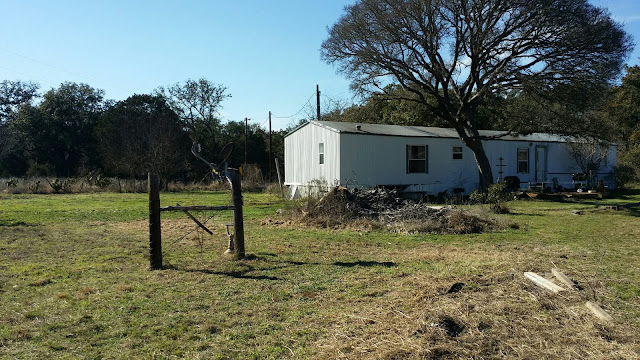 I must mention that his house is also in a rural area on 3 acres of land.  I grew up on this exact piece of land and I would like to see my toddler grow up here as well which is our main motivation for all of this hard work.  In this remodel we’ll need to take care of plumbing, electrical, gutting the house, tearing out walls, moving doors, building decks and additions.  We’ll also show our challenges for getting broadband internet and cell service coverage in the area.  We cannot wait to get started on this adventure and hope to document as much of it as we can along the way!