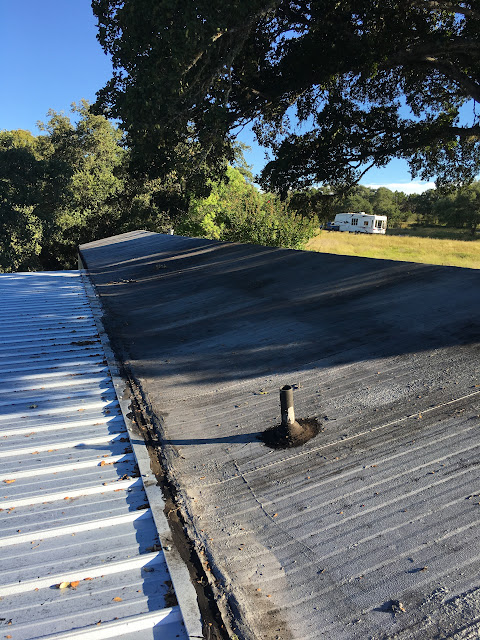 Yep, that's right.  We're having to put a new roof on this mobile home renovation.  We won't be completely tearing off the old roof, we'll just be putting a new roof over the top of the old one.  And the reason for our haste is because with the recent rains that we've had, we discovered leaks coming in through the roof.  In all of our replacing of rot, tearing out and re-framing of the interior and exterior walls, the roof has flexed so much that things just aren't as sealed and connected as they were before we started.  We knew this was coming from the beginning, we were hoping to be able to do it later but with these new leaks we decided that before we put new materials on the walls like insulation and drywall we should probably fix the leak situation.  We definitely don't want for any of our new materials to get ruined because of leaks! 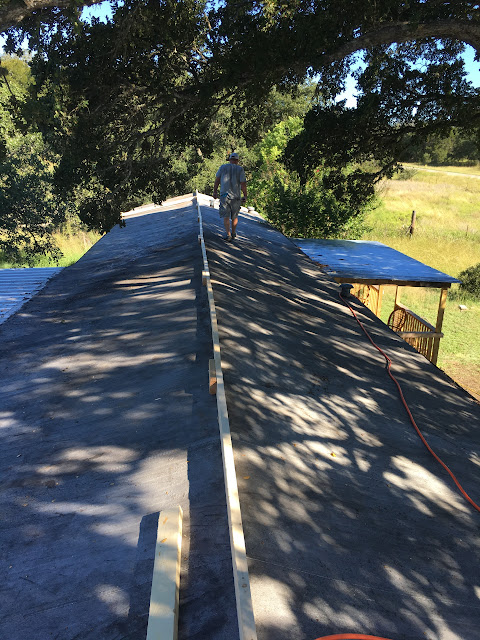 Pictured right is our roof before. The new addition roof on the left and the old mobile home roof on the right after 2 coats of aluminum protectant. You can also see Mike up there helping TJ get the measurements lined out. We're so thankful for his help! 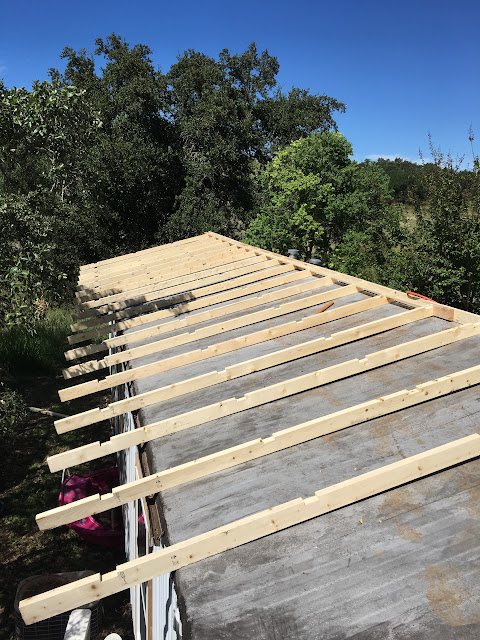 These rafters were placed directly on top of the existing rafters in the ceiling of the house.  We used the same 3 inch ring shank nails to nail these rafters through the roof into the existing ceiling rafters.  Since the existing roof metal was in such bad shape, not all of the new rafters were able to sit flush, as you can see the gaps above.  So 6 inch lag screws were used on every other rafter to screw them into the top plate of the exterior walls.  This is to ensure the wind doesn't budge our new roof.  These rafters are set roughly 2 feet apart to match the existing rafters in the ceiling but not every rafter was exactly 2 feet apart.  We used roughly 80 10-foot 2x4's for the rafters.  The overhang you see above will be trimmed in the end to accommodate fascia board, but we plan to leave about a foot overhang to help with water runoff. 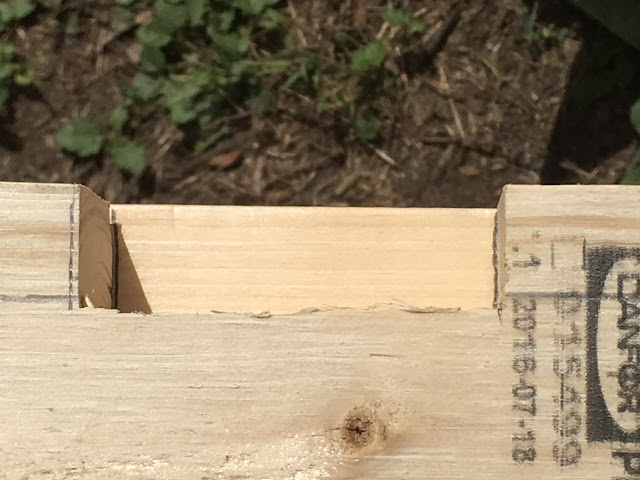 The notch pictured above was cut in every rafter in 4 spots to support the furring strips.  These cuts made the job very time consuming.  A miter saw was used to make these notches.  We went with 1x3 furring strips to save on cost. 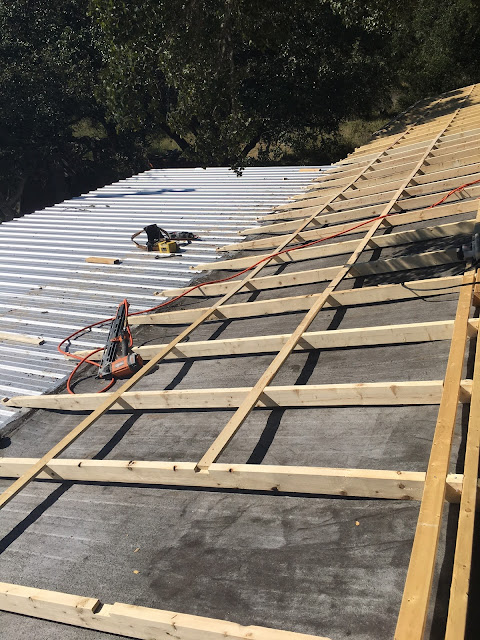 ﻿
Above you can see the furring strips running across the rafters.  They are 1x3x8 and about 120 of these were used. 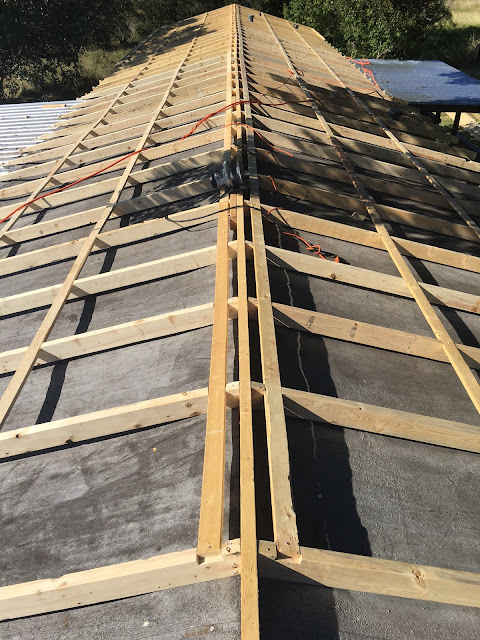 Here's the roof with pretty much all of the lumber in place!  Now we're ready for metal! 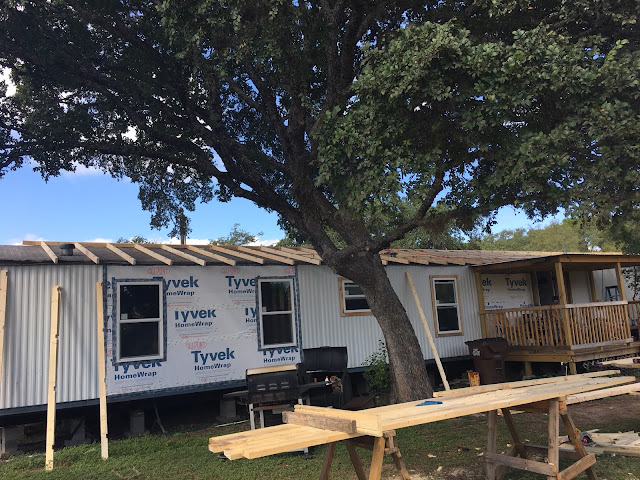 Above you can see the overhang before we added the fascia. 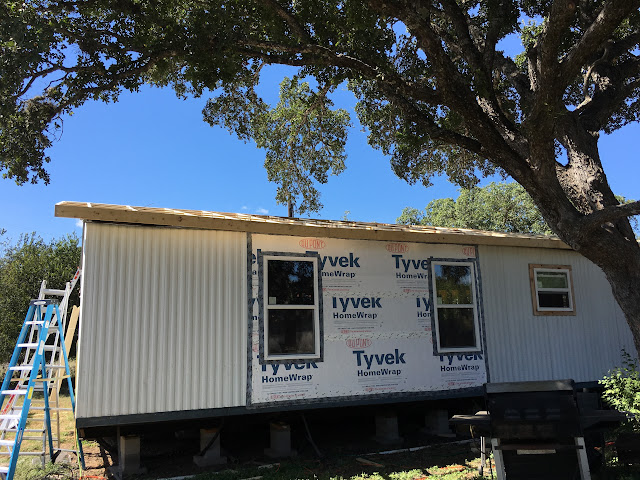 ﻿﻿﻿﻿﻿
And above you can see the overhang after it was trimmed, and fascia was installed.  This is just added protection for the rafters from moisture. The fascia was made out of 14 foot 2x6's.  A router was used to cut a groove for the soffit. 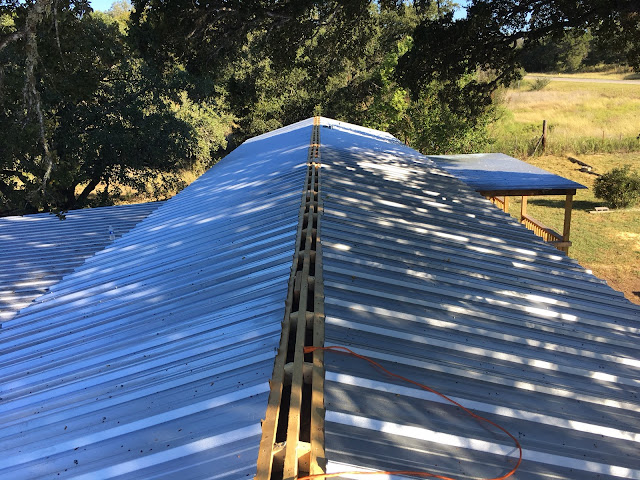 ﻿
We used 50 sheets of 9 foot R-Panel to cover the roof, 25 sheets on each side.  They were fastened to the furring strips with metal roofing screws. Close to 1,000 screws were used.  Each sheet of metal was fitted from the bottom up using a piece of 2x4 to get exactly 1 1/2 inch overhang past the fascia, to help with water runoff.  Each sheet of metal has to be screwed down to the furring strips, so for that reason, and for safety purposes, it's best to only put in place a couple of sheets at a time while you are screwing them in.  This will help you to keep track of where the furring strips are as you are putting in your screws. 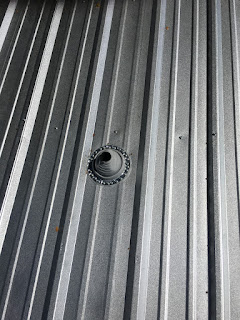 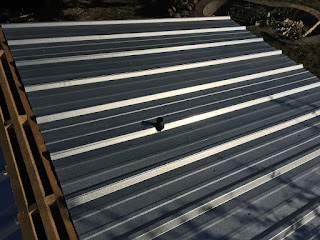 There are 2 plumbing vents, 1 in each bathroom that sticks up out of the roof.  Holes had to be cut in the metal to accommodate these.  We used a rubber flashing to seal these vent pipes to protect against leaks.  They applied a bead of silicone at the bottom of the boot and put in lots of screws to hold in place. 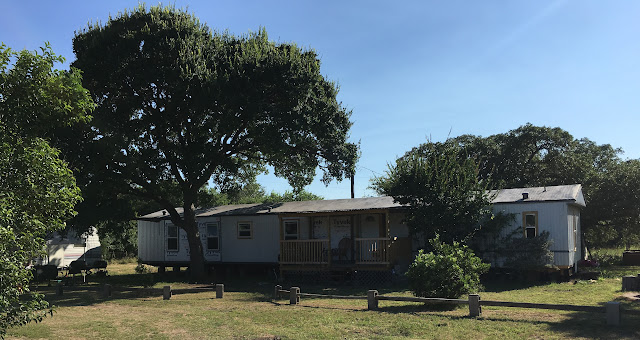 Pictured above is the house before the new roof. 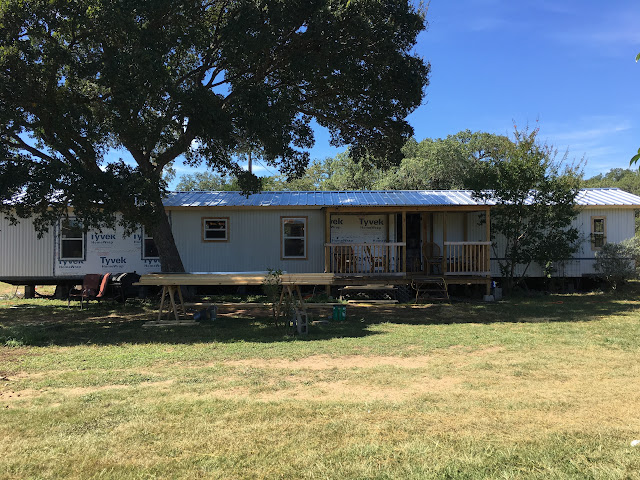 And here is the house after the new roof.  In total, it took about 10 days to install.  We love the way our new roof looks!  And best of all, we have added piece of mind that we shouldn't have any more leaks (we'll have to wait for a good rain to check!), and HOPEFULLY it'll help with our electric bill.  We're putting a lid on this mobile home renovation a little at a time!
﻿﻿﻿﻿﻿
Posted by Gem at 7:45:00 PM