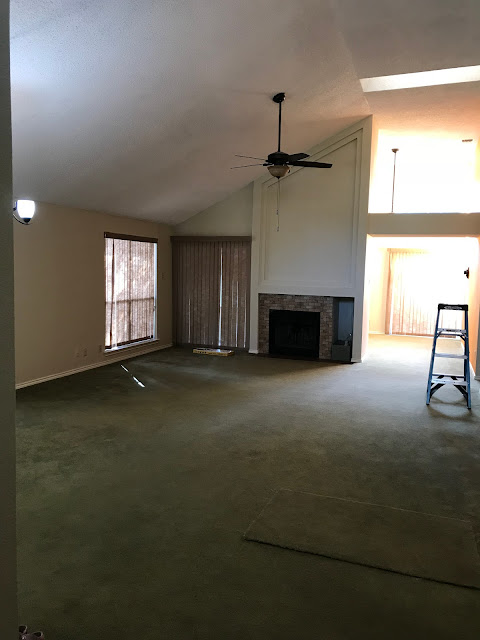 We decided that we wanted to mount our 60" Sony flat screen above the fireplace.  We noticed that in all of the realtor pictures, the previous owners had TV stands in front of the fireplace for their TV.  And we did our research to find out all of the reasons against mounting above a fireplace to make sure we wanted to do so.  The heat and soot are two good reasons not to mount your TV above the fireplace if you plan to use your fireplace often.  We, however, live in South Texas and our winters aren't very harsh so we felt pretty confident in our decision.  We knew that given the configuration of the room, it was the most logical decision and I didn't want to face our couches any other way.  Never having had a fireplace in a home before, I absolutely wanted the fireplace to be the focal point of the room. 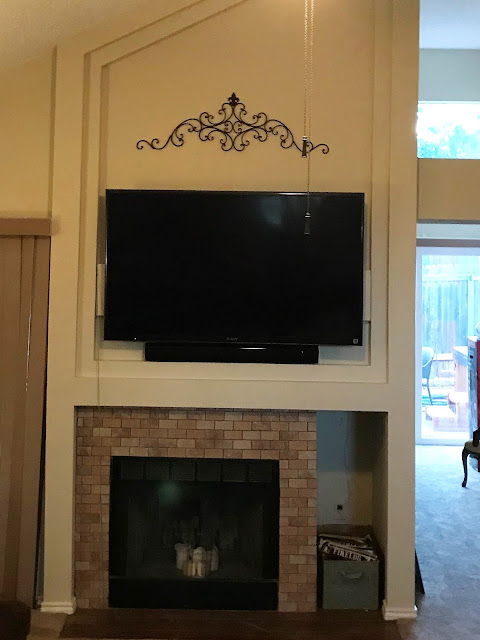 We discovered that the studs in the fireplace behind the drywall were not consistent, There was one stud just to the right of the middle, and no others except outside of the recessed area.  My husband bought a 2x12, textured and painted it with Wool Skein to match the rest of the wall.  Then cut it to fit inside the recessed area.  Then he used long screws (2 on each side, top and bottom) to secure it to the studs on the side, and then attached the mount to the 2x12.  He also used 2 lag bolts into the one stud we found in the middle, JUST to be on the safe side.  This was the only way we were comfortable with mounting a TV that large.  It look a little modification but we got it done!  Then he ran electrical from a light switch that is on the wall on the side of the fireplace and put an outlet behind the TV.  He also ran CAT5e and coax to plates behind the TV as well.

Lucky for us, we have that cubby beside our fireplace so we were able to cut a small hole in the top of it so we could see what was going on up there.  The stud finder really had us scratching our heads since the studs weren't consistent.  It was alerting on some areas that weren't actually studs and it really helped to be able to see in there without cutting a huge hole in the wall! 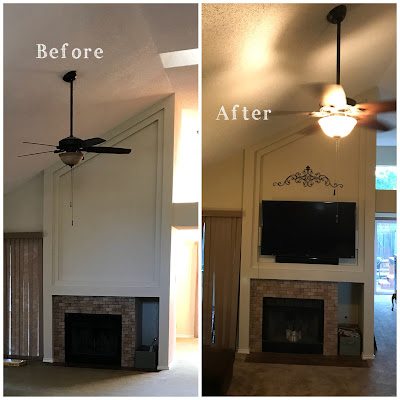 I would definitely recommend that if you plan to mount your TV above your fireplace, or on any wall for that matter, know what you're dealing with.  And if you don't feel comfortable with the project, hire a professional!  We consulted one on this project and confirmed our plans to make sure this was an acceptable method.  Know that there will not always be studs available to attach to, and a Plan B may be needed.

He also mounted a sound bar under the TV.  I love this look!  So much cleaner than TV stands and cables!  Our big city remodel is starting to come along nicely!
Posted by Gem at 9:25:00 AM